An interactive performance piece for a standing audience who is invited to put on Silent Disco Headphones to receive live instructions from two choreographers. The pair lead them through a series of choreographed meetings.

In the performance there are three wireless audio transmitters which feed three separate wireless headphones groups. Two choreographers talk to audience headphones thru microphones. They change, combine groups dynamically during the performance. To isolate their voices they have to seat apart but at the same time they have to be able to independently control and route their microphones. There is no sound desk, two microphones, playback, mixing and routing is done in an audio interface with QLAB software.

One choreographer uses laptop keyboard, the other needs an interface. I designed, programmed and built the interface for remote microphone routing. Each of three interface buttons route – fade in or fade out – microphone to a single channel. They can be combined. Pushed button sends midi command to trigger the microphone fade Qlab cue followed by another midi cue which turn the button led on or off to confirm the triggered cue was fired. Each fade cue has also a shortcut hotkey assigned and can be triggered from laptop keyboard independently.
The Interface is based on Teensy LC which acts as a midi host. When plugged into a computer it is recognized as a midi device with a custom programmed name. Push buttons are non-latching and every press sends midi command. Toggle function is programmed in the interface. Additional little status led show that interface is connected and working. 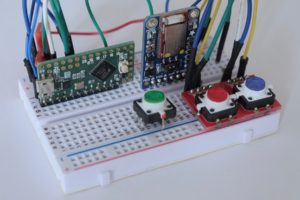 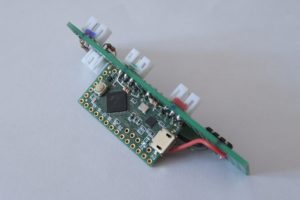 Board with sockets for buttons and LEDs 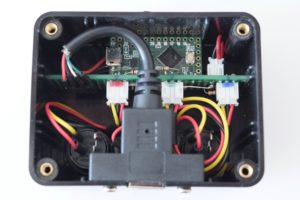 Board slide into the enclosure, wired up with buttons and USB socket. 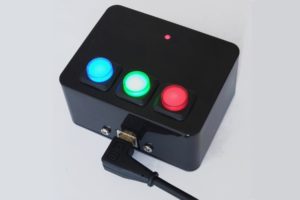 Back with USB socket. 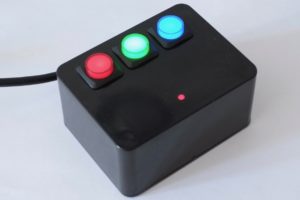 The Hairs Of Your Head Are NumberedSensors for monitoring audience's pulse and GSR. Theatre performance. Shiver Me TimbersMultimedia Server for a stormy sea installation.